Also known as Burg Eltz, Eltz Castle sits on the Elzbach River in southern Germany and is still occupied by descendants of the family who built it 850 years ago.

The castle is surrounded on three sides by the river Elzbach. Wolfgang Staudt/Flickr

Burg Eltz’s biggest attraction is its architecture, with its eight residential towers that rise up to 115 feet tall, as well as its bay windows, roofs, trusses, and detailed brickwork. Waldemar L/Wikimedia Commons

The lodge at Eltz Castle is decorated with 15th-century wall paintings.Daniel71953/Wikimedia Commons

The castle sits on a small rocky outcrop in a wider valley and has views for miles. Sebastien Ehlert/Pixabay

The original structure that became Eltz Castle was begun in the 9th century and expanded over the following centuries. The Eltz family settled there permanently in 1157 and have lived there ever since.Wikimedia Commons

A dragon gargoyle next to a castle window disguises a rain run-off drain.miko/Flickr

One of the castle’s many timber-framed turrets that help make it the epitome of a medieval fantasy castle.Derzno/Wikimedia Commons

A stone entrance from the courtyard. Most of the castle dates from the 14th to 16th centuries. Wikimedia Commons

One of the many relief sculptures that adorn the exterior of Eltz Castle. Wikimedia Commons

The road leading to the castle. The gatehouse at Eltz Castle was restored in the late 19th or early 20th century. immokoss/Flickr

A view of Eltz Castle and its surrounding valley.Kora27/Wikimedia Commons

Inside the Hall of Angels at Eltz Castle, used to store hunting weapons and trophies.Alex Hoekerd/Flickr

Rodendorf’s medieval kitchen inside Eltz Castle has barely been changed since it was built in the 15th century. Daniel71953/Wikimedia Commons

Inside the chapel of Burg Eltz. tjflex/Flickr

The castle study was furnished in 1881 by Count Karl von Eltz so that his wife could have a workplace. From 1845 to 1888, Karl undertook a massive restoration of the castle which cost the equivalent of 15 million euros. National Cultural Heritage Office/Wikimedia Commons

Historical works of art kept in the Treasury of the castle. Heribert Bechen/Flickr

Three gold-plated statues of Atlas, Chronos and Hercules holding the celestial, terrestrial and planetary globes kept in the castle treasury. These numerals were originally designed as three out of 12 for a clock by German master clockmaker Abraham Drentwett II that was never completed. Wikimedia Commons

The armory at Eltz Castle houses the oldest cannon bolts in the world, as well as one of the most extensive private collections of swords, piercing weapons, armor and firearms from the 14th to 17th centuries century. isria/Flickr

From 1965 to 1992, Eltz Castle appeared on the German 500 Deutsche Mark banknote. Wikimedia Commons

From the Elzbach River to the tallest spire, Eltz Castle rises a staggering 300 feet. Wikimedia Commons

A view of Eltz Castle from the west. The castle’s original fortification walls were destroyed in a siege that ended in 1336 and were never rebuilt. Since then, the castle has never seen combat action.Wolkenkratzer/Wikimedia Commons

A view of the Eltz Castle gate and entrance bridge from the east. Wikimedia Commons

A paved path leads over a stone bridge to the castle gatehouse. molinarius/Flickr

Burg Eltz contains 120 rooms in total, and today the Treasury and the Armory are the main tourist attractions with their valuable collections of medieval artifacts. molinarius/Flickr

Eltz Castle is a truly unique castle in Germany that is often not seen in travel brochures. Called Burg Eltz in German, the castle is surrounded on three sides by a stream, while the forest stretches for miles around containing rare flora and fauna.

Incredibly, it is one of only three castles on the left bank of the Rhine in the state of Rhineland-Palatinate that was never destroyed by the chaos and destruction of war.

In addition, a line of the same family that built the medieval town in the 12th century still owns it to this day. To date, 34 generations of the Eltz family have lived there since their permanent settlement in 1157.

A medieval fortress surrounded by forests and traditions 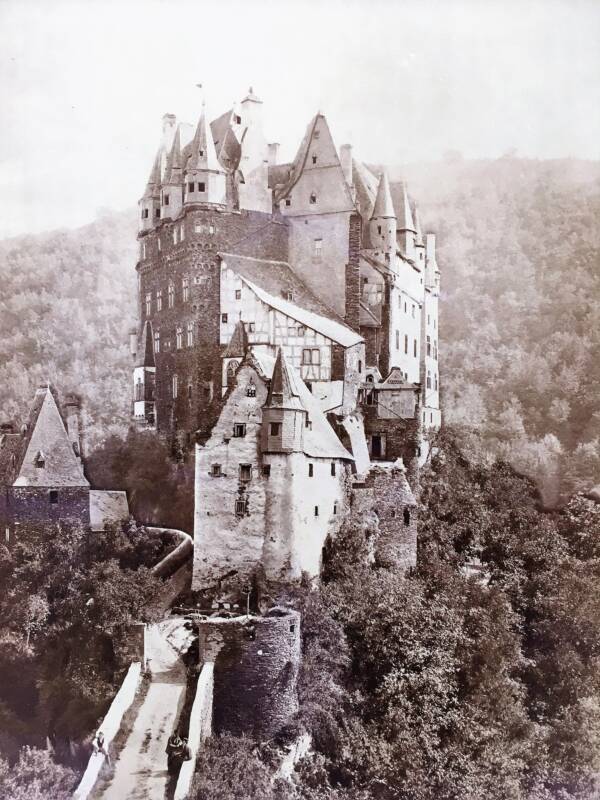 Wikimedia CommonsEltz Castle as it appeared around 1860.

Perched on a huge rock formation that itself sits inside a scenic valley, Eltz Castle overlooks the Elzbach River. There are no roads or modern buildings nearby, so it really echoes the aesthetics of the Middle Ages. Eight towers stretch to the horizon and offer a breathtaking spectacle.

This fantastical castle has garnered a cult following thanks to Instagram because it’s not often featured as a tourist attraction. The castle’s exterior, location, and scenic hiking trails are often photographed, but interior photos are not permitted. (Thus, the photos of the interior of Eltz Castle that you see above were taken by the few rule breakers.)

The family that owns Eltz Castle has done so through an incredible 34 generations. However, that doesn’t mean there hasn’t been some family drama.

In 1269, three brothers had a quarrel, and the estate was divided into three lines of succession. Remarkably, this actually settled the feud. They simply divided the fortress and occupied their own parts of the castle. They even wrote their own constitution.

Burg Eltz was not intended to be a fortress, although it uses the German descriptor for “burg” instead of “schloss” for “the castle”. It was designed as a residence. And a blueprint of this fairytale house was used as inspiration by Disney when designing Cinderella’s castle for the animated film.

Inside Burg Eltz Castle and its ancient halls

Because only one branch of the Eltz family lives in the castle today, 80 of the 120 rooms inside Eltz Castle have been turned into a museum, including a treasury and an armory that houses over 500 weapons, works of art and other artifacts from the last 850 years.

And the inner courtyard showcases the different architectural styles that the builders used as the castle grew over the years. 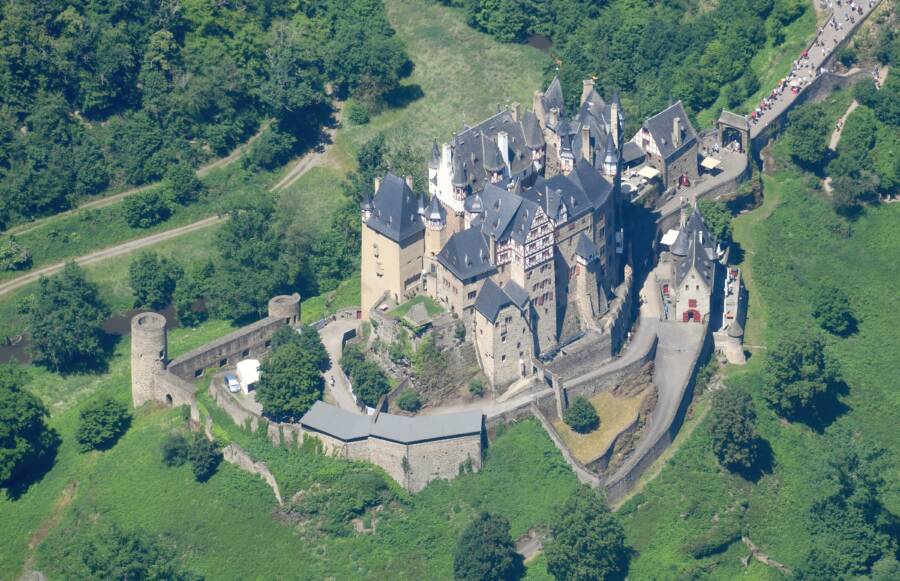 Wikimedia CommonsAerial image of Eltz Castle (view from the south).

Probably the most important room was the Hall of Knights, where festivals and meetings were held. However, a tourist hotspot is Rodendorf’s kitchen, which has remained virtually untouched since the 15th century. It’s as close to authentic medieval cuisine as you’ll see.

There are the Upper and Lower Rübenach Rooms, named after a minor branch of the family, which feature amazing stained glass windows and murals on the walls. The lower hall even has the iconic Renaissance painting Madonna with child and grapes.

In the Hall of Angels, hunting trophies and weapons adorn the walls. The Wambolt Room houses a clothes press and spinning wheel. The Chamber of the Countess presents what is probably the oldest known painted Renaissance bed still in existence.

And in what is called Banner Hall, the opulent Gothic vaulted ceiling circa 1480 serves as a reminder that this room was probably once a chapel. Since then, its main use was as a dining room or living room.

Other rooms include the lodge, the voters’ room and a beautifully decorated office in 1881 for the wife of Count Karl Graf zu Eltz.

If you want to feel like you’re stepping into a movie set in the Middle Ages, put the incredible Eltz Castle on your must-see list and take a look at the gallery above to see the magnificent Burg Eltz in all its medieval. glory.