The last time I had walked through the lower reaches of the Cataract Canyon in Utah, the backwaters of Lake Powell had straddled the canyon, wall to wall. In the 1990s, I worked as a whitewater rafting guide on this stretch of the Colorado River, where on weeklong expeditions, rafters were able to experience epic panoramas of canyons, campsites on the driftwood-lined beach and roller coaster rapids. Each time we reached mile 66 from the river the current sagged into the massive reservoir and exhaled. We would put our oars away, tie up a speedboat, and drove broodingly the last 20 miles past the drowned caves of the side canyons and foam-surrounded canal buoys. Often times we would stop to visit a panel of petroglyphs probably carved by ancestral Puebloan peoples hundreds if not thousands of years ago, spirals, river scribbles, and surreal trapezoidal humanoid figures. We pushed the nose of our raft to the sign, which was once high above the river. Other petroglyphs, we knew, remained submerged below the murky waterline.

More than 20 years later, I returned to discover a transformed place. At a section of the river, where there was previously only a dead pool, there was now a sandy beach and a rambunctious rapid named Gypsum. Bright yellow-green willows lined the high water mark, and the red canyon walls soared over a thousand feet above. It was disorienting, as the last time I was there I had rolled along the flaccid surface of the river 80 feet above my head.

Researchers from the US Geological Survey are studying the hydrology of the canyon.

During these decades, the water level of Lake Powell dropped to only a third of its capacity. It was reduced by the multitudes living in the Colorado River Basin, millions of acres of farmland, and a 20-year drought that reduced runoff in the watershed by one-fifth. The reservoir retreated 40 miles into the canyon, revealing a river struggling to free itself from the vast amounts of sediment left behind.

Last year I returned to Cataract Canyon as part of a seven day fall expedition with scientists who were interested in how and how fast the river is changing. “Cataract Canyon was known as Colorado’s Graveyard,” said my friend Mike DeHoff, the tour leader. The first river racers named it for the many boats that were broken and sunk in the canyon’s formidable rapids. “Of course, once the roadblock got in it ended up meaning a whole other thing,” he said. 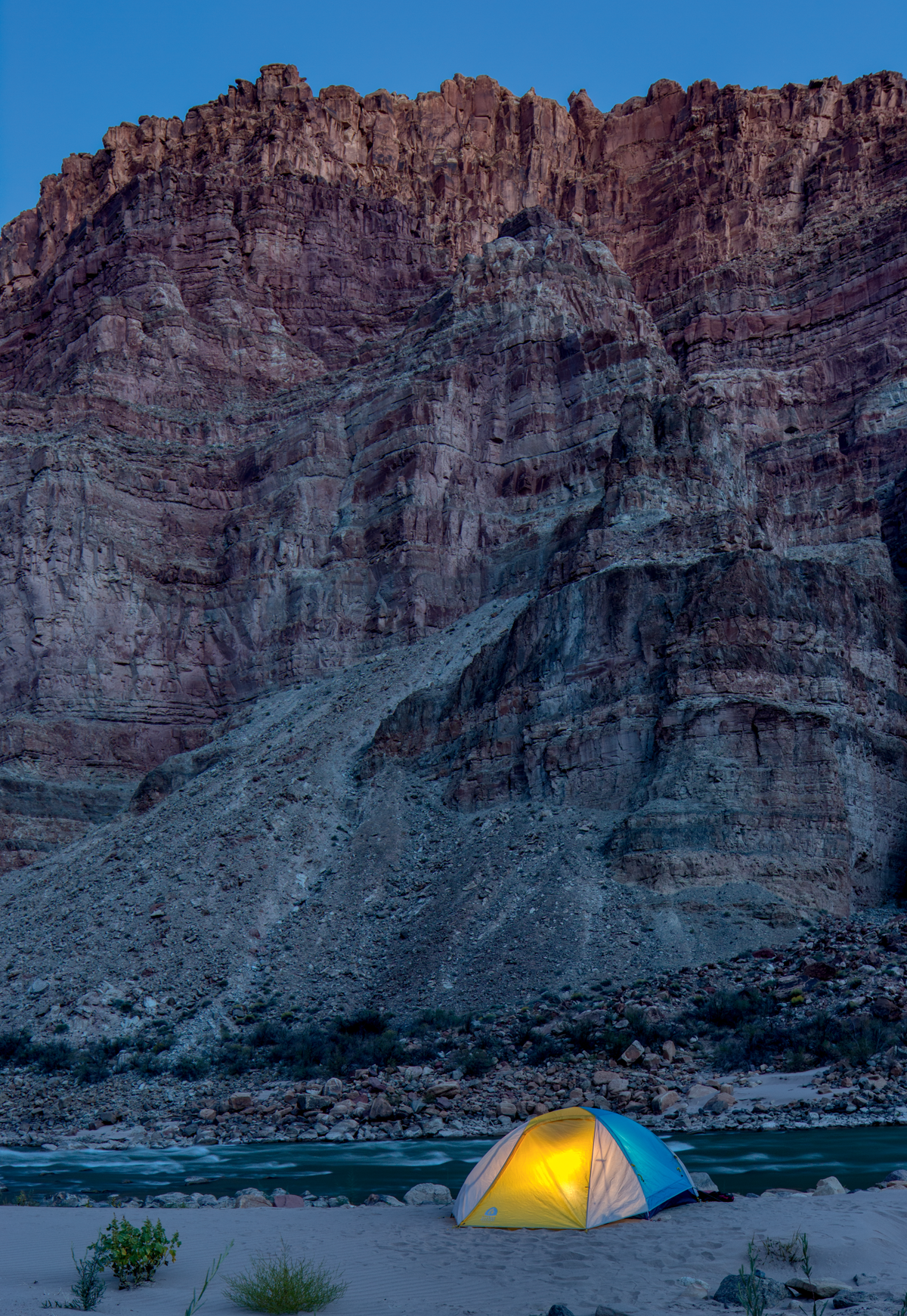 A riverside camp at Cataract Canyon.

DeHoff and I had guided Cataract together in the 90s, and he has since become a welder in Moab, where he designs custom rafting equipment. With a pair of friends, he started the Returning Rapids project; its goal is to determine how many of the 26 rapids lost under Lake Powell that the river can pull out of mud and when.

The famous silty Colorado has been called “too thick to drink, too thin to plow,” and since the construction of the Glen Canyon Dam in 1963, it has driven about 200 million cubic meters of sediment into Lake Powell, enough to fill the Houston asteroma. 150 times. Almost all of this sediment landed in Cataract Canyon. So far, eight of the river’s rapids have reappeared as the reservoir retreated.

The research expedition was in turmoil. On day five, a USGS team climbed along the rock-strewn shoreline to study the basic elevation of the riverbed by installing a pair of water gauges, one above and one below. ‘a quick one. Another group mapped the bottom of the river with an acoustic profiler, sonar floating on three orange pontoons. A third team was aboard a boat filled with sophisticated instruments, including a lidar array used to survey the river. “Three years ago it was just a gun,” DeHoff said. “Now that’s a legitimate fast.”

USGS scientists were trying to assess how much sediment is in the cataract and how fast it is moving towards the reservoir. “In a watershed that serves 40 million people, it’s good to know what’s going on,” said Scott Hynek of the USGS, who has surveyed the camp in Carhartt denim overalls and thongs. He and the geology professors took two days to map parts of the stratigraphy of the 80-foot-thick sediment layer. Their findings, which they eventually published in a geology journal, will help scientists better understand how sedimentary rocks are created in shallow deltaic environments.

University of Colorado climatologist and ecologist Seth Arens, meanwhile, was interested in how quickly the canyon’s flora and fauna are returning. Exploring a few side canyons together, he and I cataloged invasive species like tamarisk and Russian thistle, but we also recorded many native species like coyote willow and winter grease and a few stubborn seedlings of poplar, the verdant characteristic of the oases of the southwest. In Dark Canyon, we found several newly constructed beaver dams. “The changes in the landscape are generally negative,” Arens said. “It’s a positive point: the return of a natural ecosystem. “

Around the campfire, the conversation turned political: is there hope for a restored cataract? Authorities may cap the water level in Lake Powell so that the canyon will never be flooded again, said Jack Schmidt, Utah state professor. “The restored rapids and side canyons are a resource,” he said, in the same way that Old Faithful and Half Dome are. The same goes for historic and sacred sites like the petroglyph panels, again perched above the rapids. Without the research conducted by DeHoff and his friends, he said, the bureaucrats in charge of reservoir operations would never know that the non-flooded canyon is of value.

For those of us who have been rafting on this trip, the restored canyon certainly has value. While searching for one of Cataract’s biggest rapids from shore a few days earlier, DeHoff had pointed out that “from here you saw barges anchored on the full reservoir.” Now a half-mile-long rapid named Imperial rumbles around the corner, lined with boulders polished by centuries of current. Further into the canyon are salvaged classics like Short Rapid, the Chute and Waterhole, a few miles above Gypsum.

The river was coming back to itself and it was time for us to return. Excited for the ride, we piled into rafts, slipped oars into oars, and made our way through the crashing waves.

This article appeared in the fall quarterly edition under the title “Quick Returns”.