As a wave of support grows to provide water for Vernon’s beloved herons, it seems the birds are ready to do almost anything to escape the heat.

Amid reports of juvenile birds falling from their nests and suffering from the sweltering heat, at least one bird had the same idea as humans on Wednesday – to seek air conditioning.

Rory Greenwell was surprised to meet a great blue heron inside Mark’s, in the shopping plaza just down the street from the protected heronry house in Vernon.

“I met this guy at Mark’s today!” Greenwell said in an email to Castanet, along with a photo of the majestic bird playing cool on a clothes rack.

“I was told he walked through the door early in the morning.”

Greenwell says the area has been cordoned off and a conservation officer has arrived to retrieve the bird.

She says two young herons are in a yard on 53rd Avenue and the young birds often leave the nest before they are strong enough to ascend.

Their situation is made worse by the extreme heat.

“One of them tried to fly and flew up against a window,” says Bos.

“They were given a bucket of water and the option of choosing to approach a sprinkler.”

Bos says only conservation officers can remove a wild animal if it dies.

“Cruel as it may sound, nature operates on the survival of the fittest,” she said.

“People are very worried about these poor young birds who are facing threatening circumstances.”

Meanwhile, residents and neighbors have appealed to provide water dishes and other cooling sources for the birds.

Bos reminds that no one is allowed on the property of the heronry because it is a protected nature reserve and a trespassing offense. Anyone wishing to help should do so outside of the property lines. 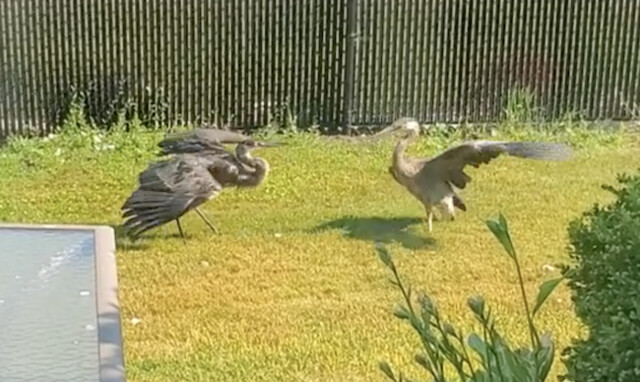 A citizen effort appears to be helping Vernon’s beloved herons.

After rumors of birds suffering from the extreme heat began to spread, residents recruit sprinklers, buckets and kiddie pools to give the big birds a break.

The Heron Sanctuary is located in North Vernon, between 24th and 20th Streets.

Vernon’s beloved herons struggle in the heat, just like the rest of us.

Adults, at least, can fly to nearby Swan Lake to have a refreshing drink and catch some fish.

But young chicks can get into trouble if they leave the nest too early.

Bos says at least one youngster is missing, another is dead, and a third has been roaming the North End for three days.

The problem is, young great blue herons are learning to fly.

“If they leave the nest, they often jump and fall, or they slide if there is a breeze. But they are not strong enough to return to the nest,” says Bos.

She says it can be overwhelming to see the helpless young birds on the ground, and she encourages neighbors to cook them water dishes in the scorching heat.

A neighborhood resident posted in the Hell Yeah Vernon! Facebook group that she had put pieces of frozen fish for the birds, which were cooling in her sprinkler.

“They struggled,” Bos said, noting that the adults will only feed the chicks if they return to the nest.

Bos said it was difficult to count how many herons returned to the tree stand near Walmart this year, but 88 nests were active.

“They came in small waves this year and very late,” she said.

Heatwave in BC: Concerns raised about conditions ...